I Am Not Your Negro envisions the book James Baldwin never finished, a radical narration about race in America, using the writer’s original words as read by actor Samuel L. Jackson. Alongside a flood of rich archival material, the film draws upon Baldwin’s notes on the lives and assassinations of his close friends, Medgar Evers, Malcolm X and Martin Luther King, Jr., to bring an eloquent, personal perspective to the current racial narrative in America.

Raoul Peck’s Oscar-nominated documentary is a journey into black history that connects the past of the Civil Rights movement to the present of #BlackLivesMatter. Ultimately, by confronting the deeper connections between the lives and assassinations of these three leaders, Baldwin and Peck have produced a work that challenges the very definition of what America stands for. 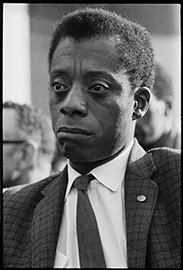 The pre-eminent African-American author of his generation, Baldwin became famous both for his novels (Go Tell It On the Mountain and Another County among them) and for his essays that tackled black-white and homosexual relationships during the Civil Rights era.

Baldwin’s remarkable language reminds us of the power of both his thinking and his prose. His words seem particularly apt today:

I AM NOT YOUR NEGRO will screen FREE twice: