Every night, as most of us head home, janitors across America, many of them women, begin their night shift. They are often alone or isolated in empty buildings — and vulnerable to sexual violence on the job. 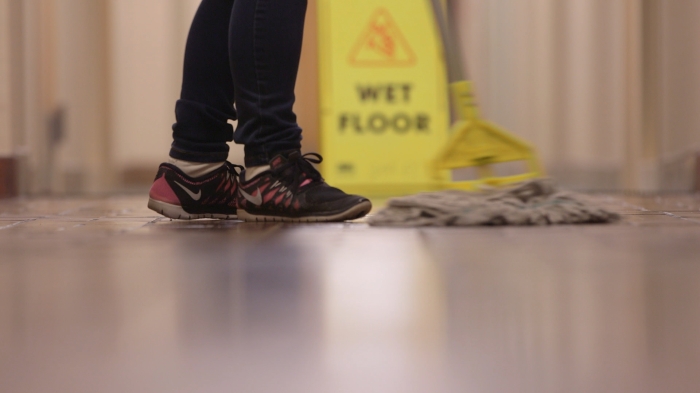 With women around the country coming forward with accounts of sexual assault and misconduct by men in politics, media and entertainment, Rape on the Night Shift explores sexual abuse in the janitorial industry.   Immigrant women working as night janitors are particularly vulnerable to sexual violence, and  many are afraid to come forward about abuse out of fear they’ll lose their jobs or be deported.

Despite those risks, women went on camera to break their silence, “I felt trapped in a world where I could not speak,” Leticia Zuniga, a night shift janitor, told the investigative team about her alleged assault by her manager. “More than anything, I thought about my kids. That’s why I endured so many awful things.”

From San Francisco’s Ferry Building, to the malls of Minnesota, to big box stores across the country, the investigative team — with correspondent Lowell Bergman, producers Andrés Cediel and Daffodil Altan, and reporters Bernice Yeung and Sasha Khokha — found violations across the janitorial industry involving companies large and small. With firsthand accounts from female janitorial workers like Zuniga who say they have been sexually abused by their coworkers and supervisors, the collaborative investigation explores the steep price many women in the janitorial industry pay to keep their jobs and provide for their families, and examines why such cases are often difficult to prosecute.

“Nobody listened to me,” said janitor Georgina Hernandez. “These are women with money, women in Congress, and they get help. They get the attention. They are women who are worth something. But I am a woman who is worth something, too.”

The film was made in 2015 and updated in 2018 to show how the government, businesses and law enforcement are responding to the problem — and how they reacted to the Rape on the Night Shift investigation itself: “I was sad. I was angered. And I wanted to do what we could do, from the state, to be able to protect these women,” says California Congresswoman Lorena Gonzalez, who introduced a bill requiring sexual harassment training for all janitors in the state, directly inspired by the investigation. Governor Jerry Brown signed the bill into law in 2016.  The updated version also shows how many of the women changed after reporting the sexual abuse they suffered.

As the #MeToo conversation spreads beyond the worlds of Hollywood, media and politics, Rape on the Night Shift is a powerful look at the impact of sexual abuse on some of the most vulnerable women in the workforce.