In January, the Appreciating Diversity Film Series will present two important films that focus on the ways American institutions and policies have contributed to racial segregation and discrimination in this country.

The House We Live In exposes how government policies, particularly around housing, have adversely affected minorities. After World War II, with the support of the GI Bill, housing boomed, and segregated suburbs like Levittown popped up all over the country. Real estate practices and federal government regulations (including “redlining”) directed government-guaranteed loans to white homeowners and kept non-whites out.

This discriminatory access to housing and to home loans led not only to greater segregation, but also to a decline in housing investment in minority neighborhoods. The result of these policies was to exclude minorities from the net worth generated by rising housing values in suburban neighborhoods. Today the net worth of the average African-American family is about 1/8 that of the average white family, largely as the result of these policies.

As Supreme Court Justice Harry Blackmun wrote, “To get beyond racism we must first take account of race. There is no other way.” As The House We Live In shows us, until we address the legacy of past discrimination and confront the historical meanings of race, the dream of equality will remain out of reach.

The Arc of Justice, subtitled “The Rise, Fall and Rebirth of a Beloved Community,” a film by Helen S. Cohen and Mark Lipman, follows the remarkable journey of New Communities, Inc. The title is based on a saying of Martin Luther King: “The arc of the moral universe is long, but it bends toward justice.”

The film follows civil rights activists from the 1960s who purchased land in Georgia in order to create a new community and facilitate economic development and greater power for African Americans. The film follows their successes and their struggles to maintain the community in the face of crippling drought and the Department of Agriculture’s racist farm loan policies. These policies were challenged in a lawsuit which ultimately resulted in the largest civil rights settlement in US History. 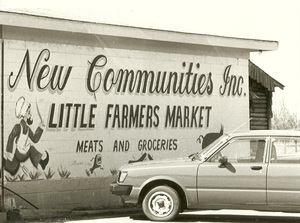 The efforts of this Georgia community were an inspiration for the creation of community land trusts throughout the country, and even the world. As Congressman John Lewis recognized, “It was a courageous and brilliant idea to bring people together in a new way of thinking. Cooperative land ownership—not just an individual, but a community.”

The Appreciating Diversity Film Series will host two FREE screenings of BOTH The House We Live In and Arc of Justice, followed by a panel discussions that brings these issues home today:

Film at 3:00, followed by panel discussion